If you need a heavy-duty piece of equipment that can handle multiple different tasks, you've come to the right place. Excavators can dig, scoop, load, move, demolish, and haul materials of all types and sizes. These machines consist of a boom, dipper, and bucket. Tracked machines sit on a rotating base. Excavators are versatile and useful across nearly every industry and application — including construction sites, mining, urban worksites, demolition projects, quarry and aggregate sites, waste centers, landscaping, and small-scale forestry projects — thanks to their ability to pair with various attachments to complete a range of tasks. 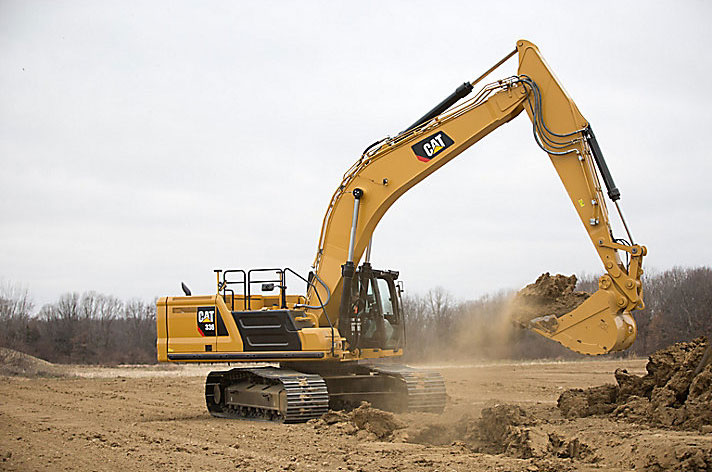 View Details Get Quote
Delivers Maximum Power and Performance in a Mini Size!

View Details Get Quote
Up to 10% Lower Total Ownership Costs

View Details Get Quote
Fits Your Jobsite and Your Wallet

View Details Get Quote
Superior Performance in a Compact Design

View Details Get Quote
Perfect for Medium to Heavy-Duty Applications

Some popular attachments for excavators include:

At Thompson Tractor Company, we have several types of Cat® excavators for sale, including hydraulic, mini-hydraulic, wheeled, and straight boom machines.

A hydraulic excavator refers to a broad category of excavating machines that use the power generated by hydraulic fluid to move a boom and stick to complete different tasks, depending on the attachment at the end. Mini-hydraulic excavators can perform the same functions as a standard hydraulic machine but on a smaller scale. They have less power than a standard-size machine, but their lightweight and compact frame make them faster and easier to operate with little to no swing movement. They can also fit in smaller spaces, including indoors, and can handle narrow and sharp turns around a jobsite. Mini-excavators can be either diesel or electrically powered.

Wheeled excavators operate exactly like tracked excavators, except there are wheels at the base instead of tracks. Compared to tracked machines, wheeled excavators are usually a better fit for jobs that require repetitive trips to complete tasks because they move faster, letting you save time and accomplish what you need to quickly.

Wheels also allow you to drive to and around the worksite when necessary. These conveniences make wheeled excavators a popular choice for urban development projects, flat or large construction sites, and building demolition.

If your project has hard-to-reach areas, a straight boom excavator has an extended boom that can help you get the job done. You can use a straight boom machine for low-level demolition, sorting, at excavation sites, and for jobs requiring plenty of safe distance between the operating cab and the bucket or attachment.

With specific Cat straight boom excavators, you also get additional safety features like:

As a full-service provider and dealer of Cat equipment, Thompson Tractor has an extensive selection of straight boom, wheeled, hydraulic, and mini-hydraulic excavators for sale across Alabama and Florida. Contact a Thompson Tractor representative to learn more about which excavator is best for your project, or request a quote for your new equipment today.